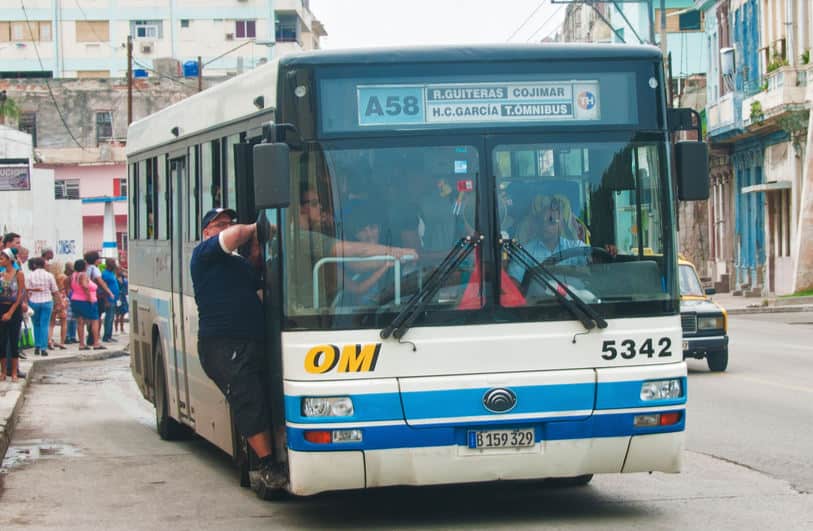 Your plane has touched down in Havana, Cuba and you need an inexpensive way to travel from the terminal into the city. What options do you have? Before, there were only two ways to leave the airport: either by rental car or taxi. Both of which can be expensive, especially if you don’t need a rental once you arrive at your final destination in Havana.

Flying into Jose Marti International Airport from anywhere in the world, you will most likely deboard the plane in Terminal 3, as Terminals 1 and 2 are for local and chartered flights. Once you get outside, taxi drivers will try to entice you to ride with them, but there is a better way.

Most of these options only accept Cuban Pesos (CUP), and NOT Cuban Convertible Pesos (CUC.)

If your flight arrives in the afternoon or evening, this white bus passes by where the taxis are waiting and runs about every half hour. The fare is 40 CUP and will take you into Havana using Boyeros Avenue to the Plaza of the Revolucion. It also stops at the National Bus Station. Here is where you get off and take any one of several city buses to your final destination. They will not take CUC.

It should be noted here that this option is hit or miss. If the bus driver suspects you are a tourist, they will give preferential treatments to airport workers if the bus gets crowded.

There are city buses that stop in Terminal 1, but not Terminal 3. So you will need to make your way to Terminal 1 to catch a bus, and you can certainly do this with a taxi if catching the workers’ bus is unsuccessful. There is also a shuttle service in between terminals, but they may be intermittent.

The Viazul bus station is at about 15 km from the airport in the Vedado district, so you will need to take a taxi to get there. From here the bus will go into city center. Payment is by CUP only and tickets are available at Arrivals Hall in Terminal 1.

The connecting bus that runs from Terminal 3 to Terminal 2 only passes by Terminal 3 every hour or so. From Terminal 2, cross the street and take the P16 or P19 bus that runs to Havana city center; the trip takes roughly 50-60 minutes. This bus does not have a time table, but runs frequently. The fare is 1 CUP. Both buses go to the Plaza de la Revolucion, and the P16 stops at the Vedado.

Depending on where you are staying in Havana, many hotels and guest houses offer complimentary or small-fee shuttle buses from the hotel to Terminal 3. Check with your accommodation to see if they offer this service.

To get back to Havana airport at the end of your trip, simply reverse the route you took into Havana. Happy Travels!

DISCLAIMER – This website is not the official website of HAVANA AIRPORT and is an independent guide to the airport.